Trump Jr. via Flickr. Gage Skidmore is licensed with CC BY-ND 2.0. To view a copy of this license, visit https://creativecommons.org/licenses/by-nd/2.0/

Fewer than 100 people attended a rally near the Capitol to praise those who stormed the building on Jan. 6 as unfairly treated “political prisoners.” Several extremist groups cautioned members to avoid the gathering, claiming it would be a “trap” set up by law enforcement to surveil and arrest them.

Fed 1: Definitely not a firearm in my pocket… I’m just happy to see you.

These guys would be great undercover at a golf course on Martha’s Vineyard. https://t.co/4YEzaDix43

That was presumably Trump Jr.’s point of view, as he mocked members of law enforcement in the audience for not being particularly efficient “undercover.”

He mocked the officers, calling them a “absolute joke… pushed into these stupid positions to entrap Americans.”

What an absolute joke. It’s a shame at the hard-working men and women of law-enforcement, the actual door kickers, are being led by such clowns and forced into these bullshit situations to entrap Americans. https://t.co/wXzeQ5gfu4

Trump Jr. did not appear to recollect the true risk that police officers faced during the Capitol insurgency on Jan. 6, when rioters ran wild around the Capitol for hours. This time, more security procedures were taken at a rightwing event.

His final jab was unsurprisingly directed at President Joe Biden, whom he claimed should have spent more time “being tough on the Taliban” – the group with which his father struck a deal.

If only Biden spent as much time being tough on the Taliban as he did trying to set up and entrap Americans utilizing federal law-enforcement. https://t.co/C7dTHOumwh

Trump Jr. attempted to mock Biden on Twitter, implying that he was having difficulty speaking.

However, the attack did not turn out as he had hoped. 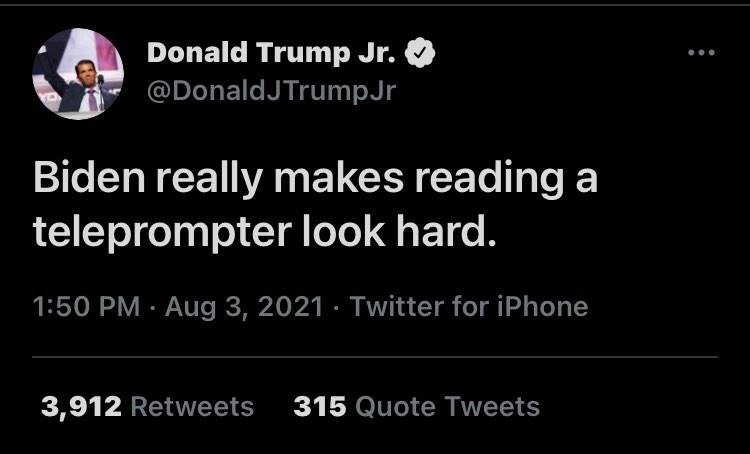 Swarms of commenters inundated his mentions on social media with clips and quotes of his father ambling and blundering through press conferences, often flubbing his comments to the point of near incomprehensibility — including his excessive slurred speech, and his lack of ability to pronounce words like “coronavirus” or “contingency.” 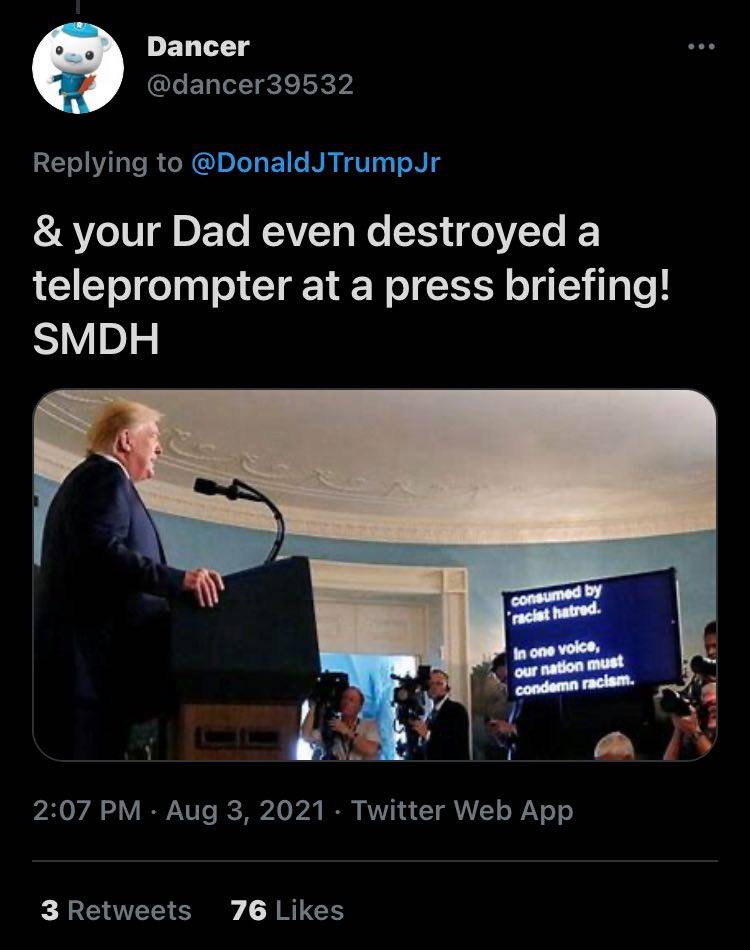 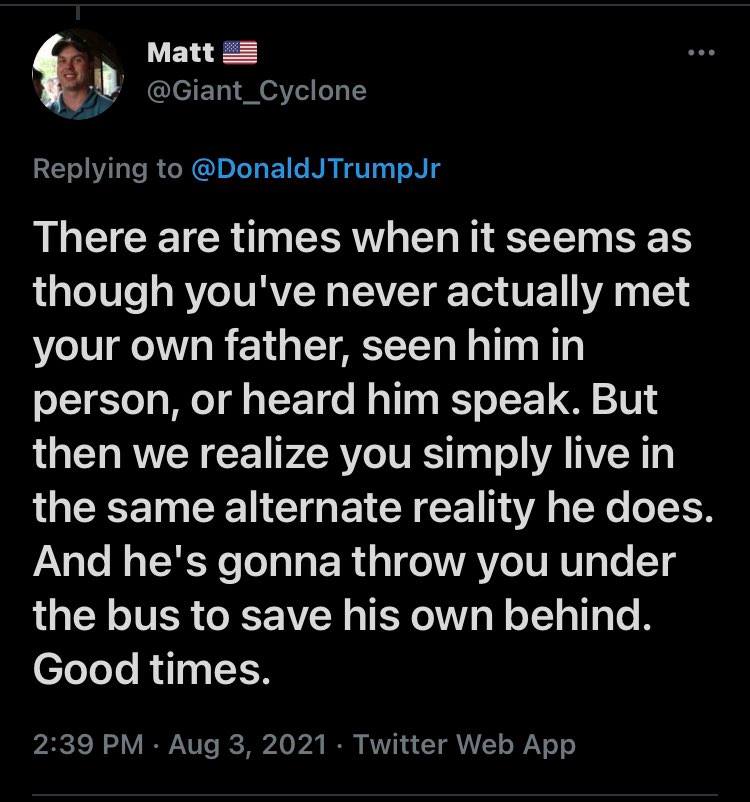 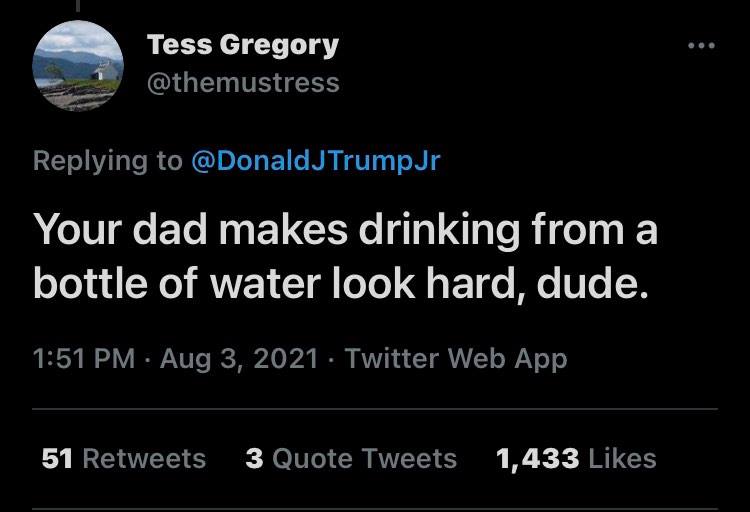 This isn’t the only time Trump Jr. has fallen on his face on social media.

Junior posted a cruel and uncalled-for statement on social media, alleging that the destruction of a mural honoring the late George Floyd by lightning is a sign from a “higher power.”

Witnesses claim that lightning struck a mural in Ohio dedicated to the late George Floyd. Last year, it was painted on the façade of a former bar in Toledo to commemorate Floyd’s death at the hands of a police officer.

It’s almost like a higher power is telling us something.

When was the last time you heard of a brick building being destroyed by lightning? I am a builder and I’m not sure I’ve ever heard of it. https://t.co/6l1f2t9nd0

“You can always tell an adult knows what they’re talking about when they have to pretend an imaginary sky friend agrees with them,” Twitter user Wednesday Lee Friday responded.

The mural, which was painted by artist David Ross in July 2020, has since served as a gathering spot for memorial services, including one on the anniversary of his death.

The area, which is littered with bricks and rubble, has been cordoned off by police.

Witnesses said that lightning struck the structure on Tuesday, causing the mural’s core section to collapse. There was a strike in the vicinity at the time, according to weather-monitoring sensors.

A representative for the city of Toledo said they were “heartbroken” to see the artwork damaged and that they planned to work with the arts commission to have it replaced. The possibility of a new mural placement was being considered.

Natural degradation, according to city building inspectors, could have caused the mural’s fall, as the center of the wall had just been spotted bowing.

Floyd, a Black guy, was arrested on suspicion of using counterfeit cash in a store and died in police custody on May 25 last year in Minneapolis.

The incident was caught on camera by a bystander, who captured police officer Derek Chauvin squatting on Floyd’s neck for more than nine minutes. Floyd was heard gasping, “I can’t breathe,” on tape.

Donald Trump Jr. also made waves recently when he used the messaging app Telegram to ask for money after the Trump campaign sent out emails and text messages.

The trouble is that it didn’t turn out the way he had hoped. Patriot Takes, a Twitter account linked with the liberal nonprofit MeidasTouch, follows so-called “free speech” platforms and apps like Telegram, where members of QAnon, white supremacists, and Nazis are welcome to propagate their ideas.

One user advised Donald Trump Jr. not to use WinRed for fundraising since the website had deceived them, accusing them of “backing fraud in November” and alleging that all of their funds had gone elsewhere. Trump’s WinRed account was a part of a fraud that was extracting recurring contributions from supporters’ accounts without their knowledge.

Another user stated that they would not pass over any funds until the election was “fixed.”

User Scottie Hall wrote that Don Jr. should tell his father “to help me out. His (sic) a billionaire. Help me back. Q said you all bad med beds. Let’s see them. (sic) Help a billionaire are you joking. You all a psyop (sic).”

Another echoed the same sentiment saying that no one should have to “donate in order for your dad to sue.”

“He is a BILLIONAIRE! (sic)” the person said. “Something isn’t adding up here.”