First Lady Melania Trump hit the campaign trail for her husband this week.

Mrs. Trump made an appearance Tuesday in Atglen, Pennsylvania to back President Donald Trump’s re-election bid. She took aim across the aisle and launched into a ruthless attack. She told, “children watching and learning about politics in our country deserve a better display of political responsibility” than that of Democrats.

Then continued to hammer them over a Democratic-driven impeachment effort. Plus went on to drill them for being distracted during the outset of a covid-19 outbreak. She claimed they “put their own agendas ahead of the American people’s well-being.” A damaging declaration especially coming from her. Beyond that she set her sights on ex-Vice President and current Democratic presidential nominee Joe Biden. Mrs. Trump tore into Biden’s “socialist agenda” and criticized media coverage of “idle gossip and palace intrigue.”

In addition she would say his “policies and socialist agenda will only serve to destroy America and all that has been built in the past four years.”

Later she tried to make it clear. “We don’t close down and hide in fear. We get to work to find real and lasting solutions.”

The state of Pennsylvania is a key battleground. With 20 electoral votes on the line.

Mrs. Trump has been somewhat reserved in her public comments. Though she’s made her presence known over the last number of weeks. In particular, she called out ex-pal Stephanie Winston Wolkoff in a White House press release earlier this month. In a post titled, ‘Give Focus to Our Next Generation’ she also highlighted the goal of helping children. Mrs. Trump making reference to her ‘Be Best’ campaign. She tied in the troubles with Wolkoff to emphasize her point.

To the surprise of many, Melania Trump used the White House website recently to air her personal grievances.

The fist lady used the White House blog to bash her former best friend Stephanie Winston Wolkoff, who recently published a tell-all book about her relationship with the first lady. 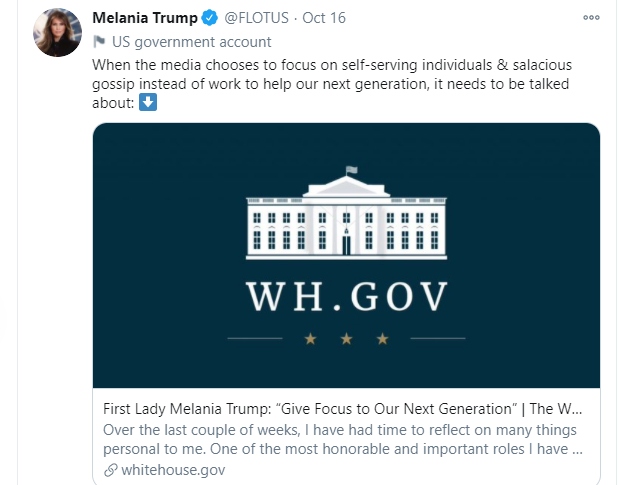 “As a country, we cannot continue to get lost in the noise of negativity and encourage ambition by those who seek only to promote themselves,” Melania Trump wrote on the website.

“I have most recently found this to be the case as major news outlets eagerly covered salacious claims made by a former contractor who advised my office,” she added. “A person who said she ‘made me’ even though she hardly knew me, and someone who clung to me after my husband won the Presidency.” Wolkoff not only published a book, “Melania & Me” she also released several audio recordings of conversations that she had with Melania.

In one of those recordings, Melania can be heard griping about having to decorate the White House for Christmas and about the criticism the Trump administration received for separating children from their parents at the border. “This is a woman who secretly recorded our phone calls, releasing portions from me that were out of context, then wrote a book of idle gossip trying to distort my character,” Melania Trump wrote.

“Her ‘memoir’ included blaming me for her ailing health from an accident she had long ago, and for bad news coverage that she brought upon herself and others. Never once looking within at her own dishonest behavior and all in an attempt to be relevant. These kinds of people only care about their personal agenda — not about helping others.”

Social media users who saw Melania’s post could not believe what they read. Twitter users quickly let her know what they thought of her blog.

“Lmao omg is this for real?” Twitter user Mamabear posted.

“Maybe it would Be Best if you didn’t mention “self-serving individuals” hun,” tweeted Mrs. Betty Bowers. “With respect @FLOTUS, when your house is made of glass don’t throw stones in others. The next generation is tired of a president that competes with them for attention & disagrees with them in everything: climate action, inclusiveness, tolerance vs hate, social equality. Sad,” tweeted DynaMoe.

Russell Drew tweeted, “Wow. Fresh off her coronavirus crisis, which impacted her and her immediate family, Melania Trump uses OFFICIAL government websites to attack her ex-best friend and the media. The most useless First Lady in U.S. history. Her main concern isn’t kids—it’s getting even.”

Wow. Fresh off her coronavirus crisis, which impacted her and her immediate family, Melania Trump uses OFFICIAL government websites to attack her ex-best friend and the media.

The most useless First Lady in U.S. history. Her main concern isn't kids—it's getting even.#BeBest pic.twitter.com/8zipMrVgsR

First Lady Melania Trump’s former ally has hit back following her scathing post on Friday. Stephanie Winston-Wolkoff lashed out at Mrs. Trump the next day.

She dismissed charges that they were not close friends. Much of their association is detailed in Wolkoff’s book Melania and Me: The Rise and Fall of My Friendship with the First Lady, that was released in early September.

As Wolkoff made her case by saying,“I find it puzzling that the First Lady of the United States asked someone she ‘hardly knew’ to attend her nuptials, join her for countless lunches, help plan the presidential inauguration, stay over at the White House and Mar-a-Lago, and act as her senior advisor,”

Then she claimed, “I wrote this book to share with the public my experience of working with Melania, our fifteen-year friendship, and her ultimate betrayal. This portrait is not all flattering but it’s the truth and Americans deserve the truth about the occupants of the White House.”

A real rebuke of the first lady’s remarks just prior. Mrs. Trump had alleged, “major news outlets eagerly covered salacious claims made by a former contractor who advised my office.” The Justice Department sued the author of a tell-all book Melania Trump. The lawsuit claims that the author, Stephanie Winston Wolkoff, violated a non-disclosure agreement that barred her from revealing confidential information about her work with Melania Trump.

The lawsuit was filed in federal court in Washington, D.C. The lawsuit asks a judge to order the surrender of profits from the book titled “Melania and Me: The Rise and Fall of My Friendship with the First Lady,” to a government trust.