McCaskill told, “He specializes in being combative and confrontational, and obviously he doesn’t feel any need to lead or unite in this incredibly painful moment in our country’s history we are all coming to grips with how badly we have handled systemic racism in this country. You know, add to that, Joy, the rally where he was talking to police officers and encouraged them to physically hurt the suspects they were putting in their police cars.”

She also expressed, “So not only is he embracing a physical confrontation, he’s embracing police officers abusing people under their custody and control, and it is outrageous. And the fact that he has called off the curfew, it’s almost like he wants there to be a problem, that he wants there to be physical violence, that somehow that will justify his rally. It is discouraging. I am really proud of all the people that were there today celebrating Juneteenth. They were socially distancing in a state that is really dangerous right now in terms of coronavirus. You won’t see that kind of social distancing at the rally. You’ll see people gleefully putting other people at risk.”

Later she took to Twitter and posted: “I just figured out why they didn’t want to have this at an outdoor stadium. Not a big enough crowd. It looks bad in the arena that hold 19,000 people. Half empty. Imagine what that crowd would look like in a stadium.”

That following this statement from the president’s camp: “President Trump is rallying in Tulsa with thousands of energetic supporters, a stark contrast to the sleepy campaign being run by Joe Biden from his basement in Delaware. Sadly, protestors interfered with supporters, even blocking access to the metal detectors, which prevented people from entering the rally. Radical protestors, coupled with a relentless onslaught from the media, attempted to frighten off the President’s supporters. We are proud of the thousands who stuck it out.” 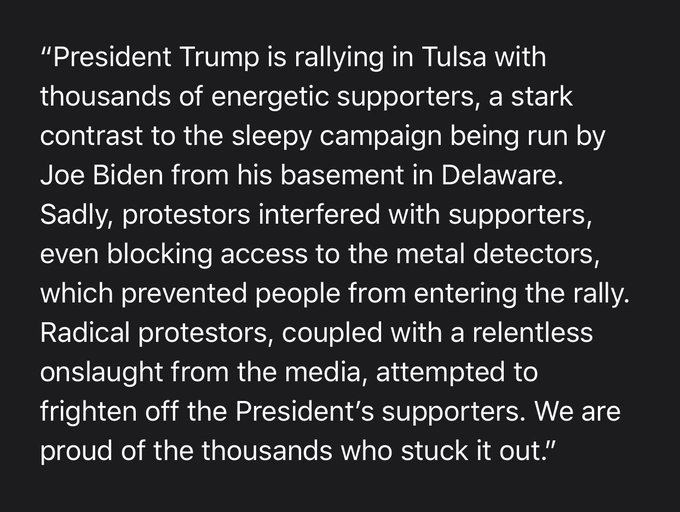 AG Barr opens up to Fox News, with new update on Durham probe