Gov. Ron DeSantis signs fascist new anti-protesting law and the response was not what he wanted

"Ron DeSantis" by Gage Skidmore is licensed with CC BY-SA 2.0. To view a copy of this license, visit https://creativecommons.org/licenses/by-sa/2.0/

Miami Herald reporter Fabiola Santiago recently called out Republican Florida Governor Ron DeSantis over his signing of legislation that she called another step toward fascism as DeSantis preps for a likely run at the White House in 2024.

Santiago notes that DeSantis signed a bill that makes protesting a crime, which critics claim is in direct contradiction to the Constitution.

Santiago notes how DeSantis is following the playbook of his “political mentor,” former President Donald Trump:

“Florida lawmakers have assaulted and trampled the U.S. Constitution during this legislative session like the state hasn’t seen since Jim Crow days. Every bill, every strategy was already cooked, party-ready, at the behest of the state’s maximum leader, Florida Gov. Ron DeSantis. DeSantis is, after all, channeling his political mentor, Donald Trump, and following his bombastic, destructive script to reelection next year, and onward, to the White House in 2024, perhaps.”

Santiago explains that according to the bill, any Florida resident caught in a protest against DeSantis’s polices could be arrested with no chance of bail.

“DeSantis and his enablers turn the Constitution into a pliable document, chipped away by legislating at the state level in order to win elections, then so be it. If, in the process, DeSantis quacks like a racist, that’s just the price of doing business with the base.”

“[DeSantis], surrounded by more than a dozen white men and women signed the bill as America awaited the verdict in the Derek Chauvin case. Without an ounce of sensitivity, DeSantis assaults the rights of Floridians to protest, presiding over a major crackdown on free speech, delivered by the acquiescent, overwhelmingly Republican Legislature via the HB 1 bill — their No. 1 priority after more than a year of a pandemic. Coming in a close second: voter suppression. Who’s going to go to a protest knowing that if a few protesters get violent or more rowdy than police feel like tolerating — and you get caught in the melee — you’ll be carted off to jail, charged with a felony and held without bail like a murderer? What low-income minority resident who works — and they’re the ones holding down essential jobs tied to a schedule — is going to risk losing a job to stand in hours-long lines when they find themselves without a mail-in ballot?”

“In his quest for absolute power, the Ivy League-educated governor, a lawyer, forgets the law of the land isn’t that of his scribes in the Legislature, but the document signed on Sept. 17, 1787. Bring on the civil-rights lawyers. Florida needs them to show the governor who’s boss.”

The bill, widely criticized along with similar bills in other states, was passed through the state legislature earlier this month, passing mostly along party lines.

It has been criticized by Democrats and civil rights groups for infringing on the First Amendment right to protest.

Other speakers at the presser described the new law as something to protect law enforcement officials as well as private property against rioters. They also noted, perhaps contradicting themselves, that their state saw very little violent unrest or rioting during last year’s protests over the police-killing of George Floyd./

The law grants immunity to people who drive a vehicle through protesters blocking roads, which critics point out would have protected the white nationalist who killed counter-protester Heather Heyer during the Charlottesville, Virginia protests in 2017 by running over her with his car. 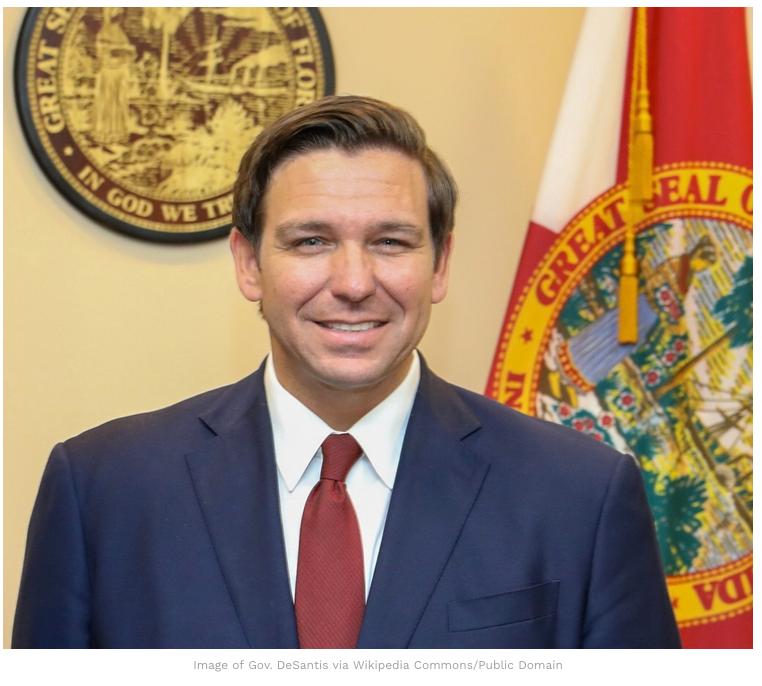 The bill also allows police to arrest for a broad spectrum of misdemeanor offenses during protests. Protestors charged under the provision will be denied bail until they appear in court for the first time. DeSantis said one of the goals of the measure is to prevent people from rejoining protests after arrest.

Agreeing with DeSantis, Republican state House Speaker Chris Sprowls and Attorney General Ashley Moody bashed other states and cities for their approach to rioting, and State CFO Jimmy Patronis claimed, exaggerating the issue, that the cities of Portland, New York, and Seattle “burned to the ground” last year during the Floyd protests.

“don’t register to vote and vote the stupid way they did up north and get what they got.”

The Armed Conflict Location & Event Data Project analyzed BLM demonstrations such as the George Floyd protests last year and their findings showed that about 220 out of 2,400 protests reported violence, but again, almost none of those took place in Florida.

Critics claim the bill is unconstitutional and will have an effect on all demonstrations and protests.

“[the law] undermines every Floridian’s constitutional rights, and it is disgusting that the GOP would rather empower vigilantes and silence voices than listen to the majority of Floridians who oppose this dangerous bill. The governor’s spectacle is a distraction that will only further disenfranchise Black and brown communities.”