Overnight Tuesday into Wednesday, Donald Trump mounted a Twitter blitz in which he demanded that his political enemies be put behind bars.

He also called out his allies for not moving fast enough to lock up his enemies.

Trump even shared a meme of Attorney General William Barr calling on him to “arrest somebody!” The obsessive tweets clearly underscore the high degree to which Trump is fixated on what he sees as grievances over Robert Mueller’s Russia probe.

Since late Tuesday night, Trump has also promised to declassify all documents he claims will prove improper activity by Obama and his intelligence advisers. He then back stepped and suggested that he had done that “long ago.”

Trump’s Twitter feed has become a barometer of his moods.

William Barr has signaled in past interviews that he has no intention of prosecuting senior Obama administration officials.

In recent weeks, Trump has made it clear that he is disappointed in the review Barr ordered.

John Durham has already signaled that he will most likely not pursue the kinds of high-profile prosecutions that Trump is demanding.

“NOW THAT THE RADICAL LEFT DEMOCRATS GOT COUGHT [sic] COLD IN THE (NON) FRIENDLY TRANSFER OF GOVERNMENT, IN FACT, THEY SPIED ON MY CAMPAIGN AND WENT FOR A COUP, WE ARE ENTITLED TO ASK THE VOTERS FOR FOUR MORE YEARS,” Trump tweeted late Wednesday morning. “PLEASE REMEMBER THIS WHEN YOU VOTE!” 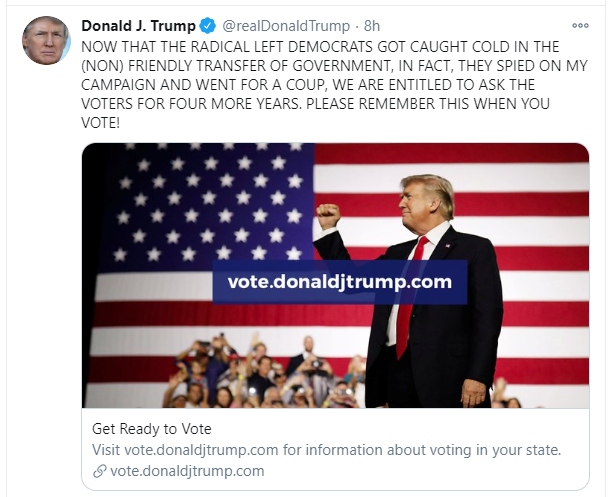 Trump has clearly been acting bizarre lately, which reportedly is being noticed by his son as well.

It appears that Donald Trump’s reckless behavior since being admitted to Walter Reed Medical Center has created a rift within the first family.

According to a report by Vanity Fair sources say that Donald Trump Jr is greatly upset with his father’s decision to drive around Walter Reed Medical Center last night with agents from the Secret Service while he is infected with the coronavirus. The sources state that Don Jr. told friends that he tried lobbying Ivanka Trump, Eric Trump, and Jared Kushner to help and convince his father that he needs to stop acting unstable.

“Don Jr. has said he wants to stage an intervention, but Jared and Ivanka keep telling Trump how great he’s doing,” the source shared.

Don Jr. reportedly does not want to confront his father on his own.

“Don said, ‘I’m not going to be the only one to tell him he’s acting crazy,’” the source added.

The family does appear to be unified over Trump’s manic tweeting on Monday morning. Trump sent out more than a dozen tweets all in caps from Walter Reed.

“They’re all worried. They’ve tried to get him to stop tweeting,” a source close to the family said. It is possible that the family’s concern about Trump’s current behavior could raise concerns about his fitness for office.

Reportedly, Trump is on steroids, specifically one called dexamethasone, which comes with side effects that can affect mood causing euphoria.

Trump was flown to Walter Reed Medical Center on Friday and admitted. The White House has offered conflicting reports about his health and it was revealed that the timeline in which Trump was infected may have been misrepresented.

The White House has not commented on the reports about Trump’s children’s concerns about his behavior.